Latest COVID-19 guidelines: What to know before booking this activity. 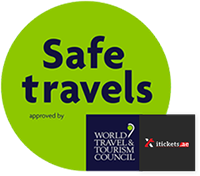 IMPLEMENTATION OF THE VACCINATION STATUS ENTRY REQUIREMENT
In line with the latest directives issued on June 28, 2021 by the government of Abu Dhabi pertaining to entry regulations to public spaces, all guests accessing Yas Theme Parks will be required to show proof of vaccination as of August 20, 2021.

In the interest of prioritizing the health and safety of our guests and colleagues, all guests, including Annual Passholders, must download the 'ALHOSN UAE' smartphone application and show proof of vaccination status to be granted admission. Note that a valid vaccination status is activated 28 days after a guest receives all doses of their vaccine. Proof of vaccination will be validated through ALHOSN app only.

We all love theme parks don't we? Things are about to get better at Abu Dhabi as Warner Bros. World™ opened doors to the public. Located on Yas Island, the world's first Warner Bros. branded theme park will bring together all your favorite Warner Bros. characters and stories under one roof to offer you an enthralling, captivating day out for all the family. Walk through the iconic Warner Bros. shield and be transported to a whole new world of action, adventure, wackiness and more, in which you can create and enjoy many a memorable moment with family and friends!

Six truly immersive lands - Warner Bros. Plaza, Gotham City, Metropolis, Cartoon Junction, Bedrock and Dynamite Gulch - will come together to create an unparalleled fan experience. Expect everyone from Batman to Bugs Bunny, Superman to Scooby-Doo amongst 29 state-of-the-art thrilling rides, a host of interactive family-friendly attractions and unique live entertainment. There's also multiple dining options, from grab-and-go to full-service sit-down restaurants and cafes, and a variety of enticing retail offerings from which you can choose your favorite Warner Bros. inspired souvenirs.

The center of Warner Bros. World™ Abu Dhabi, Warner Bros. Plaza is an elegant art deco celebration of all things Warner and the Golden Age of Hollywood. Meander the streets of the Plaza, admire the architecture, and choose somewhere to eat from the many dining options on offer; you'll have plenty of your favorite characters for company.

Enter the gleaming urban landscape of the iconic city of Metropolis, silhouetted against the eternal sunset sky; modern, cosmopolitan, safe. Home to reporters Clark Kent and Lois Lane, with the legendary Daily Planet at its center, and of course protected against evil by Clark Kent's secret alter ego, the one and only Superman.

Behold the majestic skyline, revel in the heroic optimism of the man himself and his fellow heroes of the Justice League - including Wonder Woman, Green Lantern and The Flash - and be captivated by their brave, daring exploits as they relentlessly crush any attempt to unsettle the equilibrium in this legendary city. 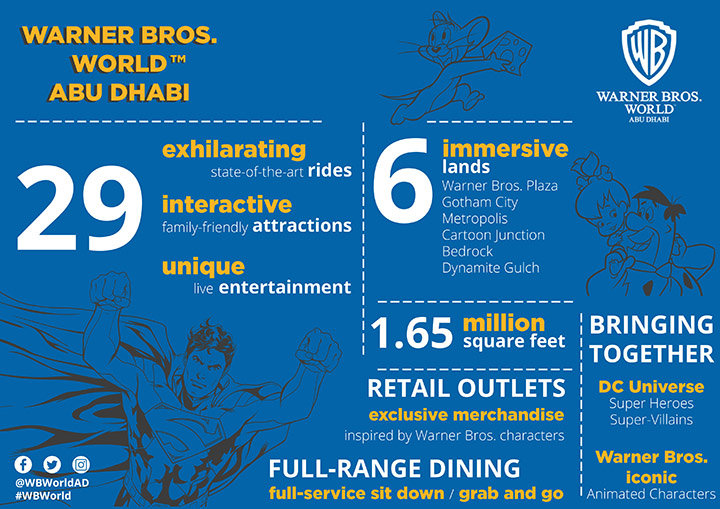 Step back in time as you enter Bedrock, a rocking land full of Stone Age family fun and adventure. Packed with iconic features from the legendary family favorite show, Bedrock gives you the opportunity to get up close and personal with all your favorite characters in the middle of their prehistoric town.

Join in with lovable cave-families The Flintstones and The Rubbles - Fred, Wilma, Pebbles, Barney, Betty and Bamm Bamm - and characters Dino and Baby Puss as they go about their everyday lives. Check out our delectable Dino-sized meals and exciting rides.

A little bit crazy? Ever so slightly on the wacky side? You'll fit right in at the frantic, chaotic, colorful land that is Dynamite Gulch. This desert landscape is packed full of exciting escapades, animated antics and mad mishaps that'll keep every member of your family on their toes.

Take a dizzying dash through the desert and follow full-speed favorites Wile E. Coyote and Road Runner on their epic hair-raising adventures, prospect with the fiery Yosemite Sam, check out who's caused a crater with his Martian crash-landing, look out for The Jetsons.

This is a land where you'll get to relive all of your childhood memories. It'll be an opportunity to discover the fun and joys of the iconic characters and animated stories. These will range right from Looney Tunes and Hanna Barbera. The adventure filled zone will also feature Tom & Jerry, Scooby Doo and animated stars including:

The fun zone will be aimed at delivering maximum entertainment not just for the kids, but also the kids at heart. Right in the middle of the zone's town square will be Tom and Jerry swiss cheese spin-a ride that will take guests on a dizzying spin marked with wild twists and turns.

ome to the world's greatest detective, Batman and a collection of evil, scheming Super-Villains operating in a sinister criminal underworld, the legendary urban landscape of Gotham City - with its brooding, archaic skyline - is full of dramatic moments, heroic exploits and action-packed fun for everyone.

Find all your favorite Gotham City characters from The Joker and Harley Quinn to Scarecrow in this dark, sinister world brightened only by the Caped Crusader and his dedication to stopping the bad guys. As the sun sets Batman rises from the shadows to carry on his campaign of helping good triumph over evil.

Guests will have a dining range of options including:

The theme park will also feature ACME Commissary. It's best renowned for serving fast food with ACME flair and those with a sweet tooth can check in at:

For guests who'd like to take home a piece of Warner Bros, the attraction will feature a range of souvenir shops among them:

Guests can also capture memories at the Front Page photo and they can later appear on the front page of the famed publication.

The man-made Yas Island which is also home to world's first Ferrari branded theme park is clearly taking no chances in advancing towards becoming a global icon in hosting the most epic indoor theme parks. This will be confirmed by the opening of the globe's most anticipated theme park-Warner Bros, Abu Dhabi. Word on the street is, another massive project of the kind is underway-The first sea world outside the U.S deemed to open on the Island in 2022.

REASONS TO BOOK WITH US